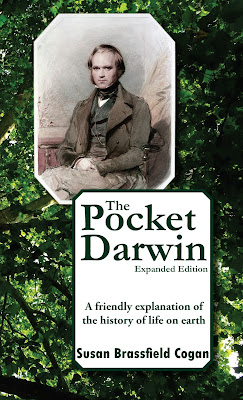 Pretty much everyone thinks they understand evolution and a few people actually do. Many, maybe most, do not.

The Pocket Darwin presents Charles Darwin and his "dangerous" idea in a short, easy-to-read form.

In September of 1837 Charles Darwin wrote “In July opened first notebook on transmutation of species. Had been greatly struck from about the previous March on character of South American fossils, and species on Galapagos Archipelago. These facts (especially latter), origin of all my views.”

When Darwin set sail on the Beagle in 1831, he was just 22 years old and had completed a degree in theology. He had every intention of returning in three years (instead of the five years the voyage actually took), to settle down to the life of a country pastor who collected beetles in his spare time. It didn’t work out that way. His round-the-world voyage on the Beagle changed his entire life and the course of science history.