Drop me a line. I answer all emails! susan.cogan@gmail.com 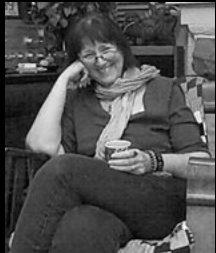 I am a full time novelist and occasionally do some graphic design to entertain myself.

I left home at the age of sixteen and hitchhiked to New York where I worked for a while as a welder in the ship yard. When they discovered my papers were phony I decided to try acting and eventually landed a bit part in Cats. I wrote my first novel backstage at the theater waiting to say my one line. That manuscript found honorable work as a hotel drawer liner.

I worked my way to Europe on a tramp steamer and back packed through France, Serbia, Romania and Transylvania, occasionally singing show tunes to pay for pens and paper.

I tried to run with the bulls in Pamplona but a young Spaniard offered me an evening of Chianti and dancing and wouldn't take "no" for an answer. So we sat on a balcony watching young men get trampled. The Chianti was delicious and so was the Spaniard.

When war broke out I became a correspondent and drove an ambulance. I had a torrid affair with one of the Australian NATO peace keepers and eventually left him for an Italian socialist who wanted my help standing for parliament. He lost but he kindly paid my plane ticket to La Paz, Peru.

The novel I wrote in Peru was sadly eaten by a lama one night during a rebel incursion. During my time with the revolutionaries, I learned graphic design so I could make their posters, flyers and t-shirts. I also wrote a novel about my torrid affair with the guerrilla leader. The manuscript was burned during a CIA drone attack.

In New Orleans I became a stenographer for Vampire LeStout. I carried a serious torch for him but he said I wasn't his blood type. I think he had a taste for the Y chromosome if you know what I mean. I asked him to read the manuscript of my next novel and I found it a few days later in the back of the garden with a stake driven through it.

During my year in Tibet, I happened to be surfing the internet one night when I found the absolutely perfect man on Ebay. The bidding was fierce and ended up wiping out my savings but I won and we now reside in a secluded villa in Norman, Oklahoma.

And, after the first sentence, not a single word of the above is true.